New Revison of my most important work now available 2018

What you should know about history to make things better. 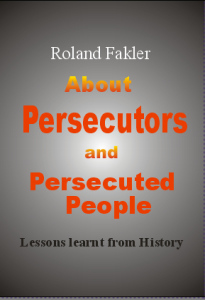 A critical history-book and a contribution to the enlightenment.

Why “great people” in world history became Persecutors or why they were persecuted.

If you have read this book, you will understand why history went so mad,

from Akhenaten / Amenophis IV -1350 to Erdogan, from Alexander to Hitler, from old dictatorship to our present dictators, like Assad…. All so called “great men” were great problems, who caused after all great havoc and misery.

Even the founders of religion, Moses, Jesus and Mohammed are the root of endless persecution. Why is that? What can we do to lead history on a more peaceful path for the future? That are the topics discussed in this book.

For at least five years I have worked on my main work.

Now it is available in German and English.

What is the reason why the so-called great people in history turned into persecutors, if they had the power to do so, and why were they often persecuted, if they fought against spiritual restriction and sought new ways of thinking as freethinkers and cultural workers? After all, why do people come to persecute others? This central, ever and ever recurring problem in world history, I want to highlight in this book and help so to advance the enlightenment one-step further.

Its about an ancient and eternal topic, a topic which I consider the most important in world history, a topic that pervades the whole history and has shaped it decisively.

The Origin of the Hebrew bible   30

The Delusion of being Chosen   31

The Persecution of the Christians  64

The Fragmentation of the Christians  66

Against Jews and Gentiles  71

The Hatred towards Jews  72

The Destruction of Paganism    76

The Aberrations of the Popes  102

The Conversion of the Pagans  115

The Fight against the Heretics  115

About Artists and their Problems  168

The most terrible of all Centuries  219

The Development of Human Rights  286

The most important Sources  287